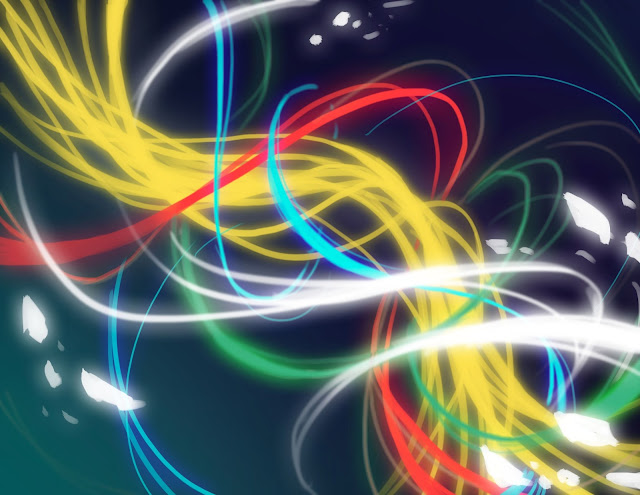 When I close my eyes and think about music visually, I see the music as flowing lines in the darkness. I decide to represent Arnold Schoenberg's "Theme and Sixth Variations from Variations for Orchestra." Op. 31 with different colors of lines that intertwined with each other. Each variants of Schoenberg’s tone row is represented by a different color. The original row, which is also the main row, is represented by the golden lines that take up the majority of the space in the composition. There are twelve lines in total to indicate the twelve tones. It is the most prominent part the audiences hear throughout the music.

I use red for the retrograde of the original row and green for the retrograde inversion of the row because green and red are complementary colors. I use blue for the inversion of the original row for the same reason, blue is cooler against the warm gold. At first I try to use more saturated and extreme colors such as hot pink and dark violet, but I realize that the four variants shouldn’t be distracting each other, instead they work together as a whole. I may finish this piece of work with just the four colors, but I decide to add in the white to make the image more interesting. The white lines are used to give strength and power to the art. Indicating that the music is in motion. I imagine it as the path that the audiences travel through; the audiences are flowing along side with the music as well.