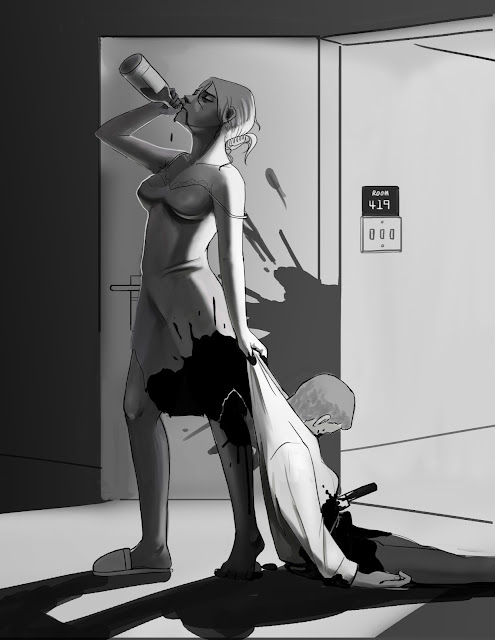 you want to hear the backstory? seriously?
it's boring...?
BTW I really hate writing assignments and i'm not telling you I that use to write novels! (in Chinese)

I know no one is gonna read this but...
Alice is a typical businesswoman who puts all her heart into her work. She has been struggling with an unhappy marriage for many years. Her husband and her are always arguing, sometimes even level up into a fight. It has been two weeks since Alice last came home. Alice now lives alone in a hotel room trying to avoid her husband. One night, she accidentally discovers that her husband has been cheating on her. He and his new lover also rent a room in the same hotel. Heart broken, Alice murders her husband under the influence of alcohol. The image depicts the scene when Alice is dragging the dead body out of a hotel room.

Alice is in her nightgown, her hair is messy, and she only wears one slipper. She apparently just walks out from her room and did the murder impulsively. Part of her dress is ripped is a sign that she might have gotten into a fight. I used the darkest black for the blood to visually emphasize how horrify the murder is. I also purposely turn her back against the light to show that she is moving towards darkness or despair.